When heaven comes down - Sky watching on treks 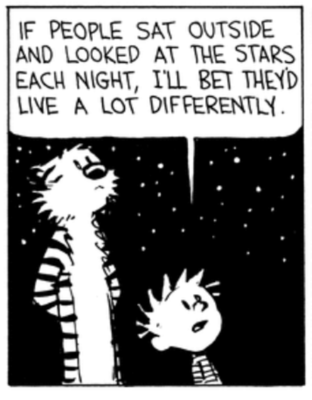 When one thinks of enjoying nature on treks, the images that come up are rolling mountains, mist filled valleys, green forests, roaring streams, waterfalls and such. The skies are not something one thinks of at first, but take it from me, they are a key component of the natural beauty one encounters on treks. The longer treks generally take you away from civilisation, which means less pollution in general, but importantly less light pollution. Higher altitudes also give you clearer skies. And usually on the longer treks, with no electricity and no phones, one has nothing to do after sunset and so that becomes the elusive final component of the recipe - some time to sit simply and watch the skies.

On the flip side, it is often cold on high altitude treks, some times very uncomfortably so, especially after sunset and that means a lot of effort and will power to leave the comfort of the tent and come out to stand shivering under the skies. And for the photographers, a trek is not the optimal way to get good photographs because of the difficulties with carrying the proper equipment. Good night sky photographs require a good camera, preferably full frame for the better clarity at high ISOs, a wide angle lens and a tripod. But when you are trekking and prioritising what you can carry, these might be a luxury. Keep that in mind while seeing the pictures below.

The most spectacular sight in the clear night sky is undoubtedly the milky way. Reading about the milky way, I always wondered what our forefathers were talking about. Where did they see this band of light across the night sky? Its only once you escape the light pollution that is prevalent close to any populated area that you can start seeing how dense the sky is with stars and then, with some practice, the denser band that is the milky way. One of the most spectacular skies that I have seen was when we were climbing Norbu. Our advance base camp was located on a vast plain of snow and ice, with the summit lurking in the background. We had aborted an attempt the previous day because of rain and so when I stepped out for an early start to the summit at 1 am, I first looked up at the sky. It was a relief to see the stars which meant a clear sky and an attempt today, but immediately after that first wave of relief came wonder. All around us was the icy plain, stretching away into the distance, and above us the clear sky was punctured by an infinite number of stars. And there, clearly visible among them, was the milky way, fully risen, stretched all across the sky above us. It was an incredible sight and I stood spell bound, even the disappointment of not having a camera with me (left at the previous camp along with most of our other stuff when we had to take the difficult decision of choosing the most essential items to carry to the advance base camp and summit) was insufficient to dent the feeling of exhilaration.

I always look out for the moon phase when we plan a trek now as the best views are on nights without a moon in the sky. So when we were set to trek the Goecha La trail in the Kanchenjunga national park, I was happy that the day of our highest camp, we would have no moon in the sky. This day also corresponded with Deepavali, the festival of lights. So everything lined up perfectly, as I got this picture of our lit tent against the Kanchenjunga with the milky way above us. 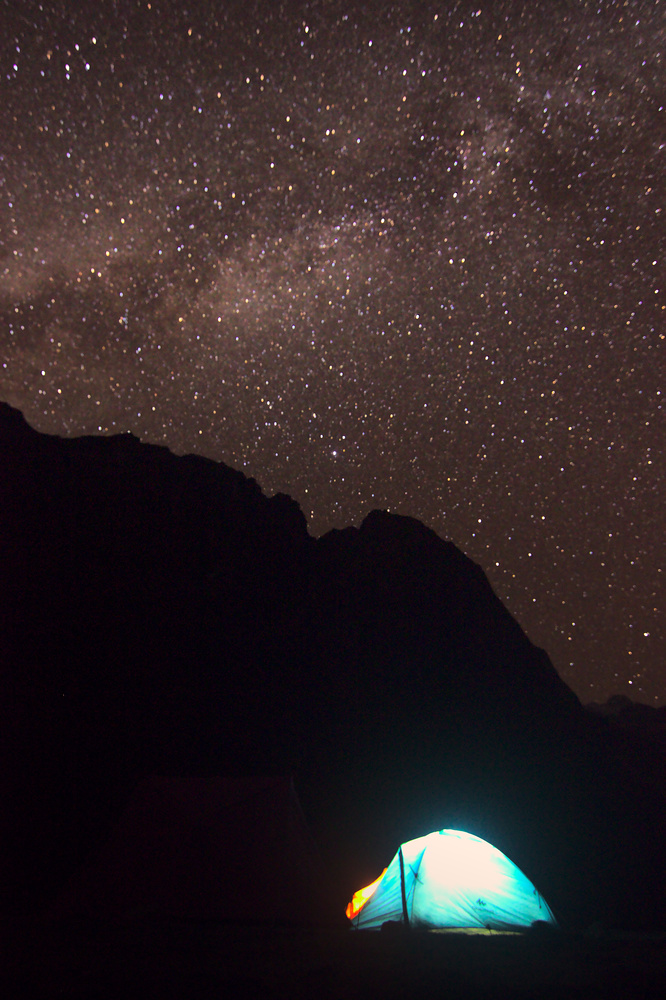 And this was at Kilimanjaro, with the camera in position (gorillapod instead of a heavier tripod), I stood in front during the exposure to get a selfie against the milky way.

Even if the milky way is not visible, the clear starry sky by itself is amazing to see for us city folks. It's like we have always looked at the sky through a dirty window and then the window was washed clean and you suddenly see it for what it is. So when possible, I sit outside and watch the skies, Among the multitude of stars, it is usually easy to spot satellites that move slowly across the sky and meteors that zip across in a fiery trail. Usually these are small, but while on the Bali pass trek, we were all standing outside after dinner when I suddenly saw a huge ball of fire shoot across the sky, vanishing in a second.

When you want to see the stars, the moon becomes an enemy, even the light from a moon that hasn't yet risen being enough to spoil the show of the starry skies. But then of course, the moon itself is always a joy to see, even though it doesn't look that different between the cities and the lonely mountains.